Just a quick update to tell about a new Docker based on the phocean/msf image.

It provides an image for the BeEF framework for XSS browser exploitation (http://beefproject.com/).

I pushed the image on Docker Hub, so that deploying it is now as easy as:

It is an automatic build based on the Github repository.

It means that the image is built by Docker, not by me. For this task, they simply have a read access to the Dockerfile on Github.

Thus, you may place in this image the same level of trust than the one you have in Docker (I cannot interfere in the process and mess with the image).

I say it because I am myself reluctant of installing third-party images. While I prefer to rebuild everything from Dockerfiles, I am fine with automatically built images if I am in a hurry and for non sensitive data.

I have kept playing with Docker recently, just for fun and to learn.

It is very powerful, but still young. It quickly shows some limit when it comes to security or persistence. There are some workarounds, yet more or less complex, more or less hacky.

Indeed, I had some issues with Etherpad, which is a Nodejs application, and its integration into Docker.

Initially, I made something quite simple, so my Dockerfile ended like that:

Thus, I simply start the app with a low privileges user.

It worked, but I had two issues:

I decided to tackle these two issues to understand what was going on behind.

I could not understand immediately the first issue: why was Docker unable to terminate the container properly?

After wandering a few hours on wrong paths (trying to get through with Nodejs nodemon or supervisor), I finally found some good articles, explaining that Docker misses an init system to catch signals, wich causes some issues with applications started with a PID = 1, which cannot be killed, or with Bash (the shell doesn’t handle transmitted signals.

I am not going to repeat poorly what has already been explained very well, so I encourage you to read this two excellent posts:

You will also find a lot of bug reports in the Docker github about this issue, and a lot of hacky or overkilling solutions.

In my opinion, the most elegant solution among them is to use a launcher program, very simple and dedicated to catch and handle signal.

I chose to use Dumb-init, as it is well packaged (there are plenty of options) and seems to be well maintained.

So, after installing Dump-init in the Dockerfile, the CMD line should now look like this:

This is where I had the toughest issue, although it is supposed to be straightforward with volumes.

Volumes enable to share files or folders between host and containers, or between containers solely. There are plenty of possibilities, nicely illustrated on this blog:

And it works very well…. as long as you application runs as root.

In my case, for instance, Etherpad runs with a low privileged user, which is highly recommended. At startup, it creates a sqlite database, etherpad.db,  in its ./var folder.

Mounting a volume, of any kind, over the ./var folder, would result in a folder with root only permissions. Subsequently, of course, the launch of Etherpad from the CMD command would fail miserably.

Simple solutions like chown in the Dockerfile don’t work, because they apply before the mount. The mount occurs at runtime and works like a standard Linux mount: it is created by the docker daemon, with root permissions, over possibly existing data.

My solution was to completely change the way Etherpad is started. I now use an external script which is started at runtime:

So now the Dockerfile ends with:

And here is the script:

I use a data volume for persistency, so the run command looks like this:

Far from being ideal, but it works. I really hope some features are coming to bring more options in this area, especially in the Dockerfile.

Globally, we can still hope a lot of improvements in security, because when I look at many Dockerfiles around, I see two behaviors:

It is scary and so far from the Linux philosophy. Let’s wait for the enhancements to come.

You can find the complete updated Dockerfile on this github page.

While we are on this topic, have a look to this nice post with some nice tips and tricks for Docker.

I made a few improvements (at least, I think they are) to the metasploit-frameword Dockerfile :

It is all up-to-date in its github repo. I will keep adjusting it, if I feel something is missing.

I hope I did it the right way, let me know what you think!

Managing updates and dependencies of a Metasploit installation have definitely been too much trouble and repetitive.

Instead of keeping reproducing boring installation steps every x months, I decided to build a Dockerfile for once.

I chose Debian for its good compromise between features, stability and lightness. I am aware of the Kali Dockerfile, that I could have used as a base. But:

So, this Debian-based Metasploit container comes with:

You can find it on my github.

If you have any trouble or suggestion on how to improve it, please let me know. Enjoy it and go ahead if you want to fork it! 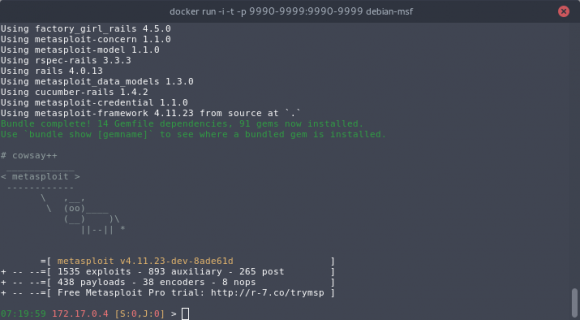