This is another off-topic post as it is not related to security.

It has been awhile since I released the TopIcons-plus Gnome-Shell extension.

I had not advertised it here because it was not really ready or stable, but now I believe it is taking shape.

The Gnome developers want to kill system tray icons, which are displayed in what they call the legacy tray.

Such icons are familiar to everybody: messaging programs like RocketChat or Telegram, e-mail clients like Thunderbird, Dropbox, KeepassX, etc.

Gnome designers think such a design belongs to past, is flawed in many ways (status or menu?) and should be useless with modern environments with a dock and a powerful notification system.

I would not comment on that and I actually believe they are right.

However, the legacy tray they propose is horrible. It is hidden most of the time and you have to click to open it before accessing to your icons. It is very painful, and it is done on purpose, to clearly send a message that it should not be used anymore by application developers.

Well, but what about the existing applications ?

They are not going away all the sudden. As a user, I still need them.

And it is open-source, mostly developed on free time: developers are not going to re-implement everything just for the Gnome ecosystem…

That is where I think an extension like TopIcons-plus is useful. It removes the hassle of this legacy tray by bringing back the icons to the top bar, so they are always visible.

It comes with extra features, like styling (opacity, desaturation, size) and positioning.

The latest release should be in pretty good shape. If you don’t want to use the Github code, be patient: it should get validated on the Gnome website within the next days.

Linux desktop is in bad shape…

The culprits? Unity and Gnome 3. I am not talking about KDE, as I never felt good with it. I had tried KDE 4 and it did not change my opinion, not to mention that I suffered from several bugs.

Unity? Like many people, I just don’t get it. It is pretty clumsy and feels unachieved. I also suffered from a lot of performance issues like this that are never fixed and make it a pain to use daily.
Gnome 3? Actually, I liked it. It looks nice, is pretty fast and smooth. What I like the most is the workflow. It really makes use of workspaces logical and optimum. But… it did not work for me! Instability, again and again.
You will tell me, that I should have stayed with Gnome 2 or go to XFCE / Openbox / etc. I have used all of them. They have qualities, sure, but we are in 2012 and I want something with more features.

Conclusion: it is sad that after so many years, Linux is not yet ready for the desktop, because some guys decided to break everything again instead of doing incremental enhancements. Why breaking so suddenly things that work? I don’t get it. I felt really fustrated with the feeling that I was at the same point as 5 years ago, dealing with the same kind of bugs. I have long been a Linux advocate and I believed I was right a few years back when I told people it was promising and superior to the competition (Windows XP at the time). Now years have passed, and I started to feel I was lying, or hiding the truth that is Linux Desktop failed and went nowhere.
Yes, I just got tired to fight with the computer to get basic things done. And considering the Linus post and several reactions into the comments, I am not alone in this case.

I recently got a Mac Book Pro. The main reason is I wanted a very stable workstation to focus on my work. It was hard to admit after so many years using it, but I came to the conclusion that a Linux desktop could not meet this requirement anymore.

So I am going to be with Mac OS Lion for a while (though I am certainly not closing the door to the Linux desktop forever). I have to say that it is a nice OS and it is damned stable. It is good to have something that works out of the box, without any frustration or need to customize things to have something suitable.

And what about the stability of Mac OS? It is very eye candy, but is it stable?

At first, I actually had some serious troubles. It was freezing almost every day, forcing me to a cold reboot. I started to be seriously doubtful concerning the stability of Mac OS, when I found by chance that the freeze occured every time that Sophos Antivirus started an update…

Wait, what? Antivirus? On Mac OS? I know it will be the reaction of many Mac users. I do also think that it is useless, but for a different reason than most of them.
Of course, I don’t get the “Mac OS is secure” marketing. Actually, it has the less secure kernel around, even though it benefits from a robust Unix architecture.
No, my point is that antivirus all fail anyway. In forensic analysis, we can even not trust an antivirus scan to decide if a machine is sane or not. Instead, we have to use specific tools and memory acquisition to make sure.
It is simply because signature-based detection can always be worked around by malwares. There are hundreds of ways to achieve it successfully: changing binary headers, code obfuscation, encryption, hooking (see rootkits and bootkits).
Ok, antivirus vendors claim that they also offer behavioral detection, sandboxes, etc. Yes, that’s a good move, but they can’t check all of the system activity and again there are many ways to bypass it. So why bother?

I mean, I still think it matters to have an antivirus on Windows. Especially for people who are not too techy. At least, it will detect the most basics threats and throw out alarms. There are thousands of such threats on Windows, and on this point antivirus offer a simple way to defeat them (though awareness and education are certainly more important).

But on Mac Os, and on Linux as well, there are very few threats. Once again, it is not that they are so much secure, but at the time I am writing, it is a fact.

You see: if there is nothing much to detect, an antivirus is overhead. It will only eat some resources and fail anyway against coming threats.
Just keeping the system up-to-date is certainly the best thing to do so far.

Well, so why did I set an antivirus? I was actually using it for my forensic analysis on Windows machines. It was a convenient way for me to have a local scanner that I could started on dumped suspicious processes, without having to connect on Viruscan. It used to be convenient when I was traveling without connection, but I can live without it.

About Sophos for Mac OS

So moreover this piece of software was crashing my laptop. The update part seems to be executed with root privileges, and for some reason it locks the system (not only mine, look at the forums). Not to mention that having such a component may offer more room to malicious code to exploit the kernel…

A shame, a pure piece of crap. Now that I removed it, I am enjoying an uptime of about 30 days!

Sophos Antivirus for Mac OS is pure crap, run to remove it if it happens to be on your computer.

Anyway, you don’t need an antivirus on Mac OS. Moreover, it seems that several vendor offer solution that lack of maturity and testing on this platform. So you would actually degrade your system stability and security if you would installed on of these.

And Mac OS is a nice Unix-based desktop alternative to have the work done, even though sadly it is not open-source.

GNS3 is configure to use Xterm by default.

If you are on Gnome, you may want to use the Gnome terminal.

The proper command to set is : 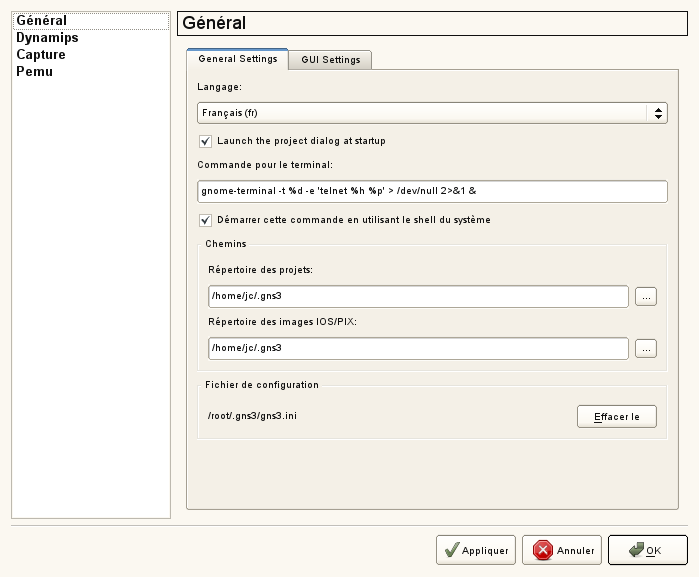 It is said that this change is useless and won’t make any difference. In a few words, you consider that the request was stupid.
On that point, and also as a Gnome user, I agree.

In that case, why would you change anything ?

No one is going to be satisfied with this. It is not a compromise, just nonsense.
KDE users will be disappointed and Gnome users will feel marginalized.

The only thing that would have made sense were either following the request and focussing on KDE integration, or clearly reject it and leave things as they are.

I have just upgraded WMWare from version 6.04 to 6.5, and I have to say that it has very nice new features.

The first surprising thing was the file I downloaded. It is now not anymore a tar.gz archive but a .bundle file.

After downloading, as root, just make it executable or start it with sh :

It now starts a graphic installer, that takes care of everything. All the compilation process is now hidden to the user.

I was expecting the compilation to fail and that I would have to look for a patch to run on my edge Linux kernel. Indeed, I just compiled 2.6.26 kernel (64 bits) a few days ago.

However, I was still prudent. Even after a compiling, previous versions almost always required some patch to get full networking to work.

So I gave a try and launch one of my virtual machines. Surprise : all worked out of the box !

For the first time, I even did not need any vmware-any-any patch or any network patched vmmon and vmnet modules to get wifi networking operational.

I also quickly noticed some very nice and fancy features :

At last, but not least, the Unity display mode.

Though I am not a Mac user, I believe this can be compared to VMWare Fusion. Anyway, it allows you to display the virtual machines programs within your X session.

Look at this screenshot : 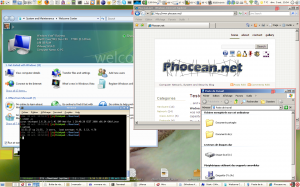 The result is quite spectacular. On my Gnome desktop, I am now able to display some windows from Windows XP and Windows Vista.

Well, this is not yet perfectly smooth or artifact free, but this is already really usable and responsive enough to be used intensively.

Another limit is the operating system support. So far, among my virtual machines, I was able to do it with Windows systems but not Open Solaris for instance.

There must have been more improvements, more or less visible, that I am not aware of. I won’t go for a full review.

I just wanted to insist that if you are a VMWare user,  you really should consider to upgrade for the complete support of the latest kernel and the Unity feature.

It seems that VMWare has listened to the Linux users, or at least is taking it more seriously. Not that they are nice, but the competitors are close (Virtual box, KVM, Xen…) !