Soktspy is a small script that may be helpful for some investigation.

Sometimes, you may detect that some suspicious network traffic coming out from a machine. In general, it is easy to spot the process from which the packets originate. You somehow connect to the PC and look for open sockets.

But sometimes, the behavior may be very sneaky, consisting of one or two packets, at rare and random intervals. Unless you spend all the day before the screen, it may be very difficult to trace.

Especially with stock tools or without installing any intrusive hardware, which is also the reason why I did this tool. On a production server, you want to install as little dependencies as possible, right?

So here is the Soktspy, a python script that easily build into a portable and standalone executable to deploy on the target machine.

Once launched, it just loops in the background and log sockets that are created for some given peers (the IP addresses you found involved in the suspicious network activity).

Maybe, some other tool exist, but I could not find anything similar. Let me know if you have any suggestion. Anyway, it was a nice exercise to do :) 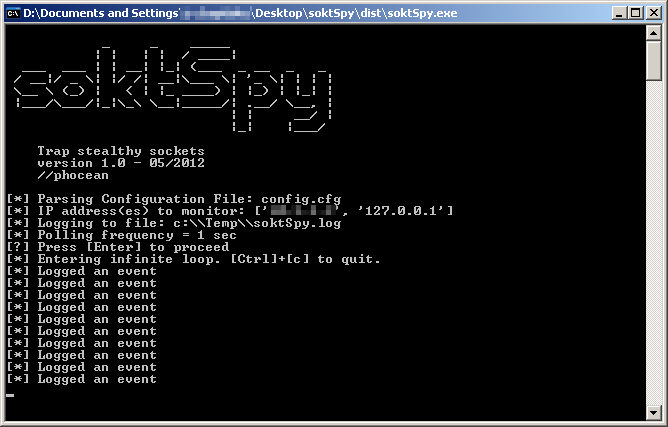 So far, I tested it successfully on Windows XP, Windows 2003, Ubuntu 11.10 and Mac OS Lion. But as it is a simple Python script, it is supposed to work on all platform.

You may recompile the program as a Windows binary executable by issuing this command:

Then, as soon as the sneaky process will send out a packet toward the monitored IP, a log record will be triggered:

The log file contains the following info, in that order:

Please tell me if you have any idea on how to improve it.

For now, I plan to add a feature that will dump the memory of the suspicious processes when it is executing.

* improve logging and  error handling
* clean up some crapy code

Netios 0.73 fixes some bugs and

Check there (tools page) for more details and a download link.

I continue to publish some my coding.

Hostcheck is a simple Perl script that can be useful to quickly check if a list of host is up.
It just read a host file and check if the host are available doing a ping test or trying to open a socket.

Nothing great, but it may help to quickly check that most of things are right after a network change, for instance.
Because we want to test many hosts, and not to scan, the pace is fast so it may not be 100% reliable. The idea is to see roughly is the connectivity is correct or if your whole LAN is down.
It uses colors and is easy to read, so it might be good to show to your manager ! :)

I hope it will be useful. More info and download link are there. 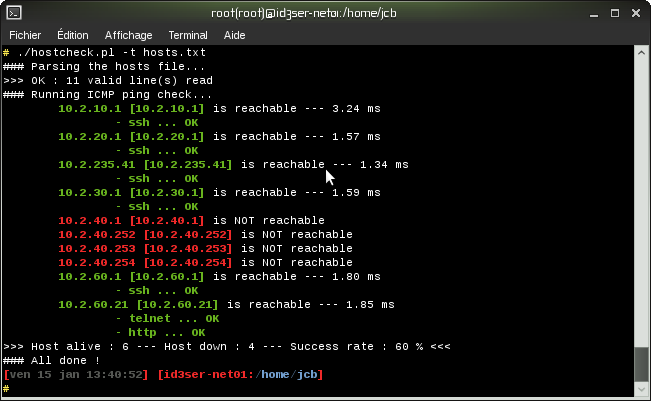