Tomas Touceda advertised a new project on Full Disclosure.
The idea sounds good, so I will keep an eye on this very interesting project.
Though I would like to know more about the methods that were used for encryption and stenography.

Code and explanations are on the ESFS project homepage.
Beyond the pratical usage, I wonder if it can offer anyhow better resistance to statistical analysis that usually defeat stenography. The author addresses partialy the point on the mailing list:

What I meant with hide is that, since it uses the LSBs, you can pick
any image, and “find data” in them, so it makes it a little bit harder
to know where you actually have data, and if you really do.

To this, a reader named stormrider pointed out an interesting research document (PDF), which is a state of the art of the limitations of stenography and the attacks against it. Is it really a dead-end ?

This is indeed a very interesting field of research.

Ravan is a new password cracking tool based on Javascript.

Wait, what ? Javascript ? Yes, as the author explains, modern Javascript engines are not so slow anymore, and in addition HTML 5 brings a new “feature” with webworkers which allow the browser to run Javascript in the background (e.g without waiting on the page executing the script).

Combine it with several computers connecting to the same page executing a password cracking script and you get easily quite a powerful distributed password cracker.

Visit this page for more details.

How the hell is it possible that after so many months, the fix for OpenSSL renegociation has not been yet included in either Chrome (6.0.4) or Opera (10.61)? I haven’t tested other browsers though, except Firefox which at least has fixed the issue since several months.

The other day I stumbed upon a weired piece of software on howtoforge.com : dns-add (code on sourceforge.net).

Actually, the purpose of dns-add was very intriguing : update your DNS in one command !

Who would need it these days where all distros include tools and script to update the DNS with DHCP. At worst, it is just a matter of opening an editor to add two lines in /etc/resolv.conf. Done in 10 seconds.

To enjoy dns-add, we are supposed to compile the source code. Let’s have a look at it first.

It gets quickly obvious that there could be something nasty. The code is clearly obfuscated, to make it difficult to read:

So now, let’s try to find out what’s behind all that. As we have the source code, the idea is to understand what the code is doing, so that we can write a snippet at the right place to just read the deciphered and potentially malicious code. That’s the easiest way, no need to disassembly and do memory forensic.

A good practice is to look for some pieces of code on the web, as developpers are lazy and often reuse already existing code. Doing that, you can save a lot of time.

Bingo ! There is a code almost entirely identical there.
We learn that the code, as old as 6 years old, actually hid a shell trojan instead of beeing a Red Hat update as claimed.

There is clearly a risk, so we must check what the code of dns-add contains. Here more hints help us again about the encoding used : some comments and a function name mention RC4 (or ARC4).

So let’s see how RC4 works and compare it with its possible implementation in dns-add.
Rougly, RC4 is just an improved XOR whith the help of a lot of keys permutations. I found a clear and short description there :

The key setup phase is only done once per message and starts by initializing the entire state array so that the first state element is zero, the second is one, the third is two, and so on.

The state array is then subjected to 256 mixing operations using a loop that steps i through the values from zero to 255.

Each mixing operation consists of two steps:
Add to the variable j the contents of the ith element of the state array and the nth element of the key, where n is equal to i modulo the length of the key. (remember, the key here means the 10 byte IV at the front of the file, (or the one your program creates, if encoding), and the given key on the command line. (Key+IV)
Swap the ith and jth elements of the state array.

After the entire mixing loop is completed, i and j are set to zero.

During the ciphering operation, the following steps are performed for each byte of the message:

They are called by char * xsh(int argc, char ** argv), which we are going to look at carefully now.

This function succevely setup all keys and decipher all the hardcoded vars. Note that a function, chkenv, setup a variable in the environment, based on the PID (and other tricks). It is not useful in the present case, but it could be developped further and used for example to avoid over-infections.

What’s interesting is actually the bottom of the function, where the guy actually builds the shellcode, putting alltogether the pieces of deciphered code.

Then, it is launched with execvp:

Before testing further, it is safer to comment out the execvp line.

Now, we just need to retrieve the shellcode, so we just add this lazy piece of code (to insert right before #if DEBUGEXEC):

That's it. A big C file just for this lame shell script. The good news is that it does what it says. There is no malicious purpose, for now, it's nothing else than a (bad) joke.

In the case of the original malware, it was more harmfull :

Technically, at the end, it is rather basic. However, it is successful in the way that it hides its purpose to most people.
What's not clear yet is the poster purpose. Fun ? Any other weired feeling ? Or just testing the capacity of the community to detect maliscious software ? If so, was he just curious or does he have any future plan ?
Maybe I should ask him.

Anyway, how many people opened and read the code ? Especially on a community driven website where people tend to have a dangerous feeling of trust and safety : it can't be malicious, the author offers the source code and nicely shares his work, right ?
And among the few people who checked the code, who really understood it ? Not everyone is an IT specialist. And even among them, not everyone is a developper or can read C.

As much as possible, download software exclusively from the official repositories of your favorite distribution (openSUSE ;)).
If you really have to use code from an untrusted source, check it, or wait for the right people to do it! Don't just grab any code, compile it and execute it blindly.

At the same time as open-source software grows, we, users, and also websites like Sourceforge will have to be more carefull about the content we download.

I did contact the author and didn't get any answer.
I reported the issue to Sourceforge, which deleted the account hosting dns-add, as it violated the website policies.

You can download the source code dns-add.tar.gz if you want to analyse it.

Check the official doc for more details. With this option activated, you can now safely upgrade openSSL and mod_ssl without breaking your clients. They should have done it from the begining, shouldn’t they ?

The next step will be to move on to the new protocol definitely, to solve for good the CVE-2009-3555 vulnerability. For that we have to wait for the browsers to support it.

Firefox has started to work seriously on it and we can expect some support in the next releases (some settings will be possible through about:config).

They even created a test site. This screenshot was taken from Google Chrome (5.0.366.2, openSUSE repo) which already has support for the SSL protocol : 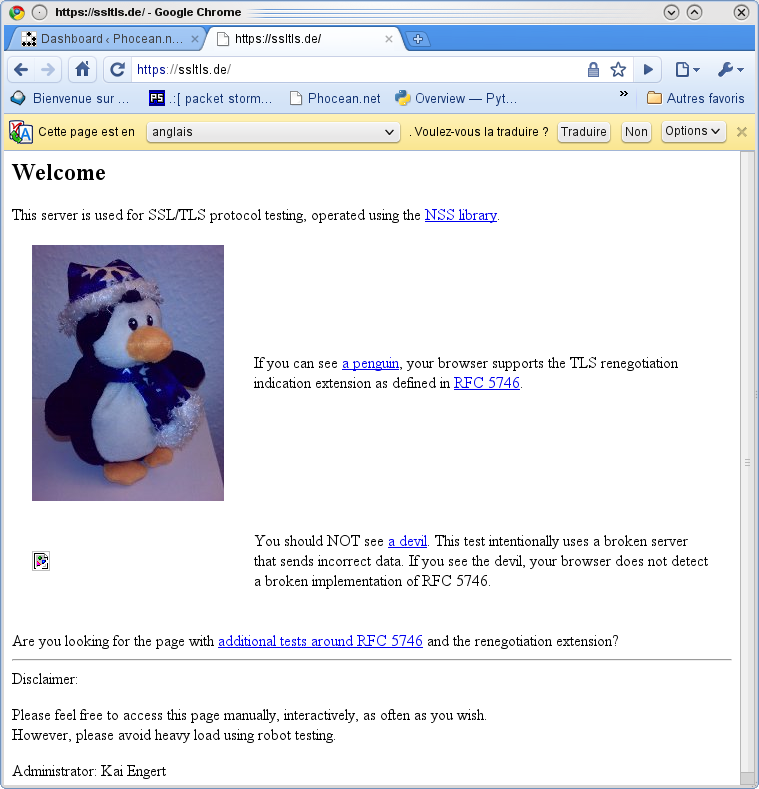 Recent work of security researchers on SSL MiTM attacks have shown how fragile the whole Internet security design could be.

But whereas some of these attacks concerns CA with insufficient security policies (md5 collisions) or some level of social engineering against the user (sslsniff), this paper alerts us on a more serious and stealth threat.

It explains brilliantly, providing us with real case scenarios, how a CA (probably under the authority of a government agency or a similar powerful organisation) can create a rogue certificate that will be silently trusted by our browsers.

The problem relies in the chain of trust : a root CA delegates trust to intermediate CA, which can at this point generate any “valid” certificate they want, even for a domain they shouldn’t sign.

In such a case, no browser will ever send an alert, so even the most experienced and most paranoid users would be easily cheated. It makes it very easy for an agency to conduct a man-in-the-middle attack, sniffing all of the user activity.
So here is a need for an add-on.

As a Firefox user, I am using Certificate Patrol. It basically alerts the user whenever the certificate of a site changes. The inconvenience is that it requires a long learning period and it also generates quite a lot of false positive (when a certificate is renewed, for instance).

Adi Shamir and Phil Zimmerman, the author of the paper above, plan to publish a new add-on, Certlock. It will check carefully all the chain of trust for a certicate and send out an alert whenever a detail is incoherent, for instance when the country of the parent’s certificate is different from the country the rogue certificate is pretending to be.