Recent work of security researchers on SSL MiTM attacks have shown how fragile the whole Internet security design could be.

But whereas some of these attacks concerns CA with insufficient security policies (md5 collisions) or some level of social engineering against the user (sslsniff), this paper alerts us on a more serious and stealth threat.

It explains brilliantly, providing us with real case scenarios, how a CA (probably under the authority of a government agency or a similar powerful organisation) can create a rogue certificate that will be silently trusted by our browsers.

The problem relies in the chain of trust : a root CA delegates trust to intermediate CA, which can at this point generate any “valid” certificate they want, even for a domain they shouldn’t sign.

In such a case, no browser will ever send an alert, so even the most experienced and most paranoid users would be easily cheated. It makes it very easy for an agency to conduct a man-in-the-middle attack, sniffing all of the user activity.
So here is a need for an add-on.

As a Firefox user, I am using Certificate Patrol. It basically alerts the user whenever the certificate of a site changes. The inconvenience is that it requires a long learning period and it also generates quite a lot of false positive (when a certificate is renewed, for instance). 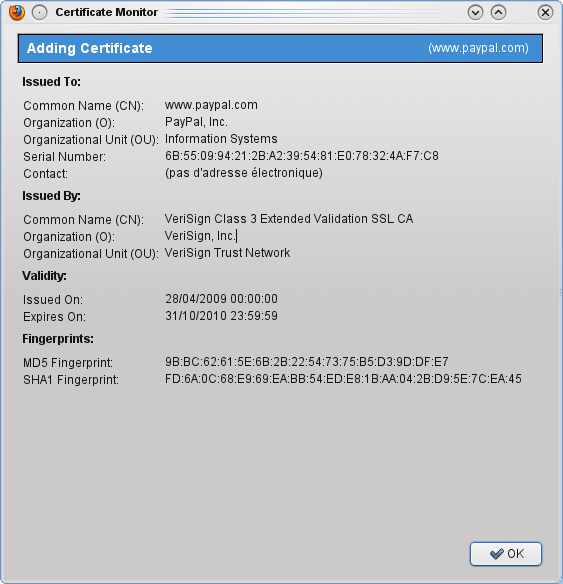 Adi Shamir and Phil Zimmerman, the author of the paper above, plan to publish a new add-on, Certlock. It will check carefully all the chain of trust for a certicate and send out an alert whenever a detail is incoherent, for instance when the country of the parent’s certificate is different from the country the rogue certificate is pretending to be.