Mainframes are not dead, why not pentesting it?

I just watched the presentation of Phil Young at Shmoocon 2013: “Mainframed: the secrets inside that black box“. I truly loved it. I thought mainframes where disappearing, but I was surprised to see that it still alive. I was even more surprised to find out that they have some Unix interface, and that there is a emulator for x86. Where it was less of a surprise is that their security is pretty low :-)

Anyway, don’t miss watching the video. Phil’s blog, “Soldier of Fortran”, is also a gold mine, he wrote many tips, tutos and tools.

It made me very curious and just in case I find some IBM Z/OS during a pentest, I though it would be nice to run it.

Although some Z/OS files are available for download on the Internet, you must own a legal license of Z/OS. This tutorial is exclusively for education-purpose, use it only for testing, never in production nor for illegal activities.

Also, I am a noob in the area. So if some of you are skilled and find mistakes or improvements, please let me know in the comments. I give a great importance to your feedback and it encourages me to continue.

I glued the pieces in the following steps (Mac OS oriented and tested only with it, the same should work for Linux with minor adjustments and see the reference otherwise):

Download tuntaposx, uncompress and install the package. No reboot it necessary, you should now have plenty of tun* (and tap*) interfaces:

First of all, checks that the network is fine:

Open tn3270 and connect with default settings on localhost: 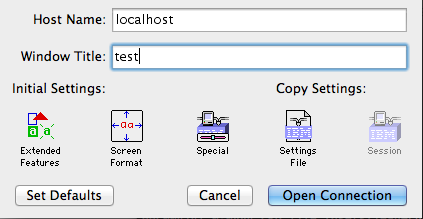 And then in the hercules terminal, enter ipl a80 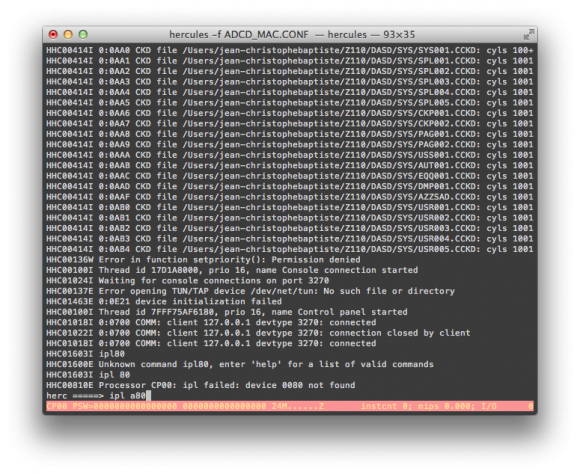 It is very long to boot, don’t worry. You will actually have to use 2 terminals, so open the second one, which will show the logon screen (see screenshot below) after booting is done. It will be used for “userland” aka TSO commands.

The first terminal shall be kept open as the master console, which receive system logs and can be used for “system-level”* commands (e.g root level).

This video demonstrates the boot process:

Z/OS emulation with Hercules390 from phocean on Vimeo.

Now every thing is in place to allow the mainframe to reach the outside. Further routing considerations are outside the scope of this article.

You could change the DUZA string, but you would have to make sure that the corresponding profile exists in ADCD.Z110S.TCPPARMS (see TODO section).

This video illustrates some of this networking stuff:

Hercules390 and Z/OS, getting the network up from phocean on Vimeo.

You can go over it by entering this in your terminal session (tn3270):

Of course, a good source of information is the hercules390 forum may also be of help.

Voilà, happy hacking! WTF, it seems I got mainframed too! Did you?

Big thanks again to Phil Young for catching our attention on this stuff.