I have run Beryl for months and have seen many huge and nice improvements.

I switched to Beryl soon after the fork from Compiz. At the time, I was on Ubuntu Breezy. The reason of my switch was a major issue with Compiz, making it impossible for my laptop to hibernate. Beryl did it. I could have solved it by myself, maybe, but didn’t have time to dig out desktop things.

Today, it is again some bugs that pushed me to switch back from Beryl to Compiz.

I have recently seen Beryl having more and more features – to be honnest, most of them are rather useless, but with no improvement on the overall stability.

I know it is one of the points that made them disagree with Compiz : adding always more and more features without much bug track. What I think now is that time shows Compiz was right.

During the past 2 months, there were not a day without a Beryl crash. I always had to reorganize my windows and reloading Beryl only gave me few minutes before the next crash. The better solution was to restart my session, giving me one more day free of bug.

Ok, you are going to tell me that it is not such a big problem. But it was one for me, considering my productivity, as I spend all the day on my laptop.

Also, despite nice efforts from Beryl to improve the settings interface, it appears to be more and more confusing. It is just too much and asks too much investment in configuration for an average user.

I, as a Gnome user, got tired with that. I like Gnome because it is simple. I feel that Beryl is looking more and more like a KDE thing…

On the other hand, I got used to the new features AIGLX gives (especially transparency and the cube) and did not want to stop using it.

So, without expecting much, I decided to give a new try to Compiz.

I was nicely surprised. It is now as easy as Beryl to set up. Just follow this easy guide.

After few days, I can say that I reached my primary goal : there is no crash anymore.
They also fixed the hibernating bug I had a long time ago. On this point, it is still not as fast as with Beryl, but no problem.

I found out a minor bug, however : some boxes showed totally empty, just the frame. I found out the workaround on the official forum.
Open /etc/X11/xorg.conf in your favourite editor as root and add

to the Screen section and :

to the Device section.

I hope it will help.

Talking about the functionalities, it is all fine out of the box. Without any tweak, I have the default settings offering nice effects. My overall feeling is that it is maybe less shiny, but less kiddy and more polished than Beryl.

I definitely recommend you to give it a try, despite the major trend for Beryl that is on the forums.
Compiz, for now, is cleaner and more “professional” in its approach.

Below is my desktop : 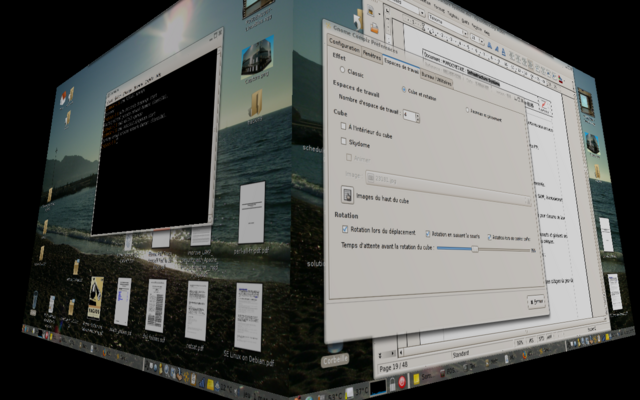